I laughed my way through survival camp - favorite read 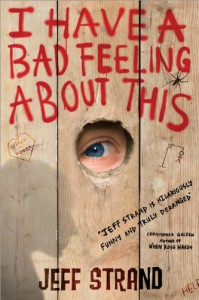 Two weeks of survival camp is not what Henry had planned for his summer vacation but his parents feel this is what Henry needs. Not being an outdoorsy type of person, Henry prefers his video games over any type of physical exertion.  Just like Henry, his best friend Randy prefers relaxing and he gets winded just eating “corn on the cob too quickly”. Randy is also committed to going to camp but he’s excited to attend as he discovers an all-girl’s camp is close by.  As the boys meet the other campers they discover that the other attendees are not as numerous as they had hoped for. It’s a small group and as Max the camp leader gets the campers under control, Max means business!  Max wants to run a tight ship, yelling ordering and making these two- weeks miserable for the boys. With each boy having their own personality, own expressions and wittiness, you never know what is going to occur.  As Max tries to lecture and critique the campers, I was laughing at the boy’s thoughts and responses.  I thought the author nailed these, they were perfect.  Henry was doing a lot of thinking and I was giggling out loud and shaking my head.  Henry, Henry, Henry, it’s a good thing that Max could not hear your thoughts or you’d be doing a lot of push-ups.   Boys will be boys and sometimes the humor was dry but it was so perfect for this situation.  Max has other issues besides the campers.  When the thugs come to collect on the debt, they didn’t expect to run into a bunch of adolescents.  This reminded me of Home Alone: its kids against the thugs. Home Alone has great memories for me and I enjoyed this part of the book as the battle rages. Oh, yeah…. the all-girl camp.  It’s there and Henry has a story to tell you.    It’s only two weeks…. the campers can make it, right?

I really needed a book like this.  Something fun, enjoyable and entertaining. What I enjoyed the most was the reality of the book.  Henry didn’t want to go to camp, he knew from watching the video what he was walking into but he went because his parents made him.  His assessment while there and the actions/remarks made by the other campers made me feel like I was a fly on the wall. I didn’t feel that there was one dominating character in the book; each character had strong and weak traits which supported the other individuals. Sure Henry was the main character but the book is not all about him.    To laugh all the way through a book is a great accomplishment and I truly have to commend the author for his ability to carry that speed and endurance. I could tell you some funny parts but there are so many: the shelters was great,  the conversations were funny, the boy’s training; words cannot explain this experience, there’s so much more plus you’ll have to read  the book to find out how they do in The Strongwoods Survival Camp Survival Games.  I will definitely be reading this book again as just thinking about it now, brings a smile to my face.

“Each crack sounded like a cannon going off. Henry suddenly felt significantly less courageous. Crap! He was going to freaking die.  Why didn’t life have a restore function so he would take back the last thirty seconds?”

Thanks NetGalley for providing me with a copy of this book.