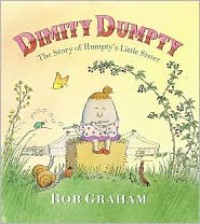 Humpty Dumpty has a sister and a family? Who knew. The Dumpty family are part of a traveling circus.  Humpty is a "rascal" and his sister is "shy and timid as a field mouse." Humpty and his parents are part of the flying trapeze act of the circus, the Tumbling Dumpties and his sister does odd jobs around the circus and plays her flute.  One day as Humpty is out spray painting on a wall (being a rebel) he falls off the wall.  Yes, this is part we are all familiar with. The soldiers come with their horses and they see Humpty but they don't take much of an interest in him and they walk away. As Humpty lays hurt on the ground, something in the wind gets the attention of someone special who comes to the aid of Humpty.  Using everything within themselves, they help Humpty and at the same time change a part of themselves.

An addition to a classic tale, I liked the way this tale added to the original story we all know.  I enjoyed the pictures - the colors and the drawings themselves.  I wished there would have been more about how Humpty and his sister got along and their relationship. I thought that part was missing in this story. Since it was about his sister, I thought it would talk more about how they got along or their relationship or they would talk more to each other.  They talked to each other only once in the whole book.