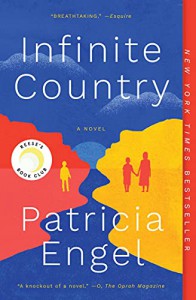 What the heck!?  You can’t be serious? I cringed a few times as I read this book, for the main characters were walking blindly.  They lived in fear, they were risking their own lives and the lives of their own children as they dodged not being caught and deported.  Sometimes I wondered if they even knew what complications lied ahead or if the thought of moving backwards was not option so they didn’t consider it.  I was hoping for the best and I feared the worse was headed their way. When would it ever end?

It was sweet when they fell in love and had their first child but when they decided to flee Columbia, the choices that had to be made and their actions totally changed the tone of the book.  They were headed to America, where a better life awaited them, didn’t it?  Entering America, they were beginning their new lives as illegal immigrants, earning money under the table, and “just surviving.”  When the couple started having more children, I was getting nervous.  More mouths, more responsibilities and additional individuals to hide.  The status of their children was now mixed and I wondered, how would that play out when it was time to go back to Columbia.

With the return date on their Visa’s coming up, the thought of returning home doesn’t sound like something they’re ready for.  Do they really have a choice? This was an eye-opening book, as the family makes some difficult decisions which places additional burdens on them.  This book covers a lot of hard topics including racism, alcohol, some sexual assault and animal abuse (small section).  It was definitely a book that got me thinking, a book that I’m glad that I read.   I received a copy of this book over a year ago from NetGalley and Simon & Schuster in exchange for an honest review.