The Story of Fish & Snail 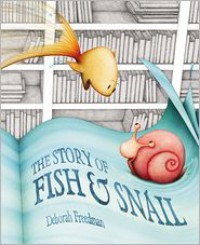 I will admit, I had to read this picture book a second time to fully understand it. There were a few key points that I was definitely missing to fully appreciate this story even after I slowly read it and looked at the illustrations the first time through. The story is about two friends who have a disagreement and what happens.

Fish and Snail live inside the pages of a storybook. Snail waits patiently, every day for Fish to arrive, to tell him a story. Snail's ideal story would have kittens and princesses in it but when Fish arrives today, he wants Snail to join him in a new book that he has found. A huge agruement errupts as Snail doesn't want to leave their current book yet Fish tries to presude his friend how much better, the new book actually is. Fish is ready to make the leap into the new book and leave his friend behind.

I can't talk about what caused my confusion without giving away some of the story's ending but it made more sense for me after a second reading. I was really surprised by Fish's actions and I thought that Snail was brave. I can see children enjoying this story. The illustations were creative and interesting too.