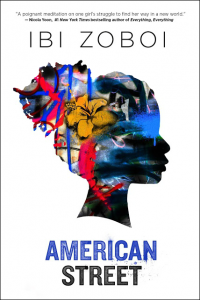 I have mixed feeling about this novel. I wasn’t expecting what I got when I read this novel. I felt it could have delivered a stronger message but I thought sections of this novels were excellent and I enjoyed Fabiola’s relationships with her cousins. Each of these relationships were unique and they showed something about the character of Fabiola. The novel focuses on Fabiola who arrives in Detroit from Haiti without her mother, Manman. Planning and saving, the two of them were going to stay with Manman’s sister and her daughters who they hadn’t seen in such a long time. Detained in customs, Manman whereabouts are unknown but Fabiola believes in the spirits that she calls upon and in her prayers, that soon they will be safely reunited.

I thought that the culture changes for Fabiola as a whole, would materialize through this novel but they were only referred to, in beginning pages of this novel. The noises, the colors, the food, the major culture difference that Fabiola notices that are missing or added to her life now, the author makes a point to mention each one as she experiences them in the beginning pages of this novel but then suddenly she must get used to them because these differences are hardly mentioned throughout the rest of the novel. It isn’t long before Fabiola gets swallowed up into being an American teen. Her cousins wrap her up in their drama, she is casts into high school where peers and fitting in matter, and it isn’t long before boys and romance come into the picture. I wasn’t expecting things to happen so quickly for her and for her feeling to become so intense. The novel is more about Fabiola becoming a teen, the ups and downs, the drama and the dangers when she gets too close to the edge. I wasn’t expecting it to go that far. I expected Fabiola to behave differently but she had gone too far, too fast. I thought the novel would also look at Fabiola and Manman issue(s) and address them, spend time on them but it didn’t happen how I expected. This novel was eventful, I loved many of the characters and I wanted to tie a rope around Fabiola to keep her close to me for I cared for her.