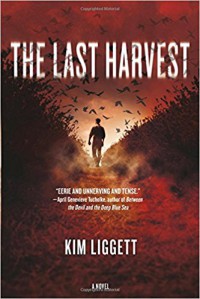 Are we sure this is a YA novel? Wow, this one was good! I loved everything about it. It reminded me of the good horror films from my teen years where not everything was spelled out but you went with the flow of it because you were high on adrenaline and anticipation. It’s like those slasher films where you’re telling the main character don’t do this and don’t that because good heavens don’t they ever watch TV and know that hideous things happen when they do that. I felt like that when I was reading this novel. I found myself asking the main character what the heck he was doing plenty of times, but Clay had lots on his mind and some of the time, I think Clay had no idea what awaited him. Clay was born into this organization, this lot of individuals, this mess that his father tried to escape but now it was up to Clay to take matters into his own hands.

One year ago, Clay found his father in their neighbor’s barn, dying. Holding a crucifix, he was mumbling words about blood and ever since then, his family has been overlooked. This morning while harvesting this year’s wheat, Clay hit a dead calf and the memories of his father’s death come charging back. The nearest cattle ranch is miles away so how the calf got in the wheat field concerns Clay. Clay feels it has something to do with the Preservation Society, the group that his father belonged to. This society is a group of the founding fathers of their community and today is the anniversary of his father’s death, Clay feels that someone placed the calf in their field. Clay never took his father’s place in the Preservation Society when he died but many of his peers whose fathers are also on the committee have joined and created their own small group and Clay intends to confront someone about this calf. What Clay discovers firsthand when he tries to confront this group shocks and confuses him. What are these individuals doing, what is wrong with them? Clay doesn’t mess around, he has a lot at stake so he gets more individuals involved to get to the bottom of things and as he does, the confusion builds, the stories become more convincing and the drama intensifies. I was on the edge of my seat, these characters moving with intent, where? That was what concerned me. There was talk about an exorcism as the Devil was among them, the invitations were out but had everyone received one? Who was the telling the truth and who was lying to save themselves, such convincing stories. Each of them giving compelling evidence, who was Clay supposed to believe. I enjoyed so many different parts of this novel, it was entertaining and as the story began to close, I had to smile for it was nothing like I expected. I think it happened too fast for one and it just was too much and that is why I am taking .5 off my review. But what can I expect, no one is perfect.