How To Hang a Witch - DNF 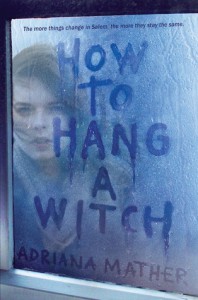 I wanted something mysterious, something dark and with some twists but each CD had the same old thing, a girl who was playing a young man, who seemed to be going nowhere except that she falling in love with a ghost with a mysterious past. I just could not grasp where this book was going after listening to over half of the CD’s of this 9 CD novel and I decided I have had enough. The whole novel revolved around Sam and I think this girl really had issues. Her family had to move out of the city when the father went into a coma and was hospitalized. They moved into her father’s childhood home and Sam meets Jackson the boy next door. Jackson seemed alright to me but Sam started finding fault with him, like she does with everyone in the novel. The Descendants, a group of girls at school, who for the most part are feared by most everyone at school, are the descendent of the first witches in Salem. Of course, Sam seems to find their bad side the first day of school. The only person Sam seems to find comfort in, is a ghost which I find disturbing. This ghost occupies their house and takes a liking to Sam. He tells her things about her family and Sam begins to feel an energy inside here, a hope to the questions she has been pondering but that’s about all I got…….an energy. There was something about their relationship that just didn’t seem right. It might have been the audio of this novel but I thought sometimes when they talked, it sounded seductive, while other times it felt parental and authoritative, and other times they joked around. I thought their relationship was strange, and I thought the ghost character itself, was a bit abnormal. I was tired with the way the novel was taking shape, or the lack of direction it was going. Sam was going nowhere, the same confrontations and the same storyline was being played over and over again and I hated to think that I would have to wait until the last CD to get any answers and any closer to the questions that were posed throughout the first couple CD’s. While listening though, I did like the author’s language. I really enjoyed the way the author reached for expensive words instead of the worn-out terms we find used over and over again. I appreciated her effort in doing this. This novel was not working for me. DNF at 56%.