The Head of the Saint 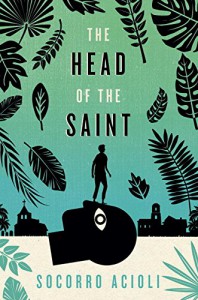 I picked this book up at the library because I loved the cover and after reading the synopsis, I knew I had to know more. I am really glad that I did as this book was interesting, strange and one of those novels that makes for an interesting conversation. The novel is centered on a Brazilian community. The novel was translated as the author is also from Brazil and I really enjoyed learning about their culture. I felt that this novel was a special type of story for me as there was not a lot of background knowledge to build upon nor did I feel any attachment or affection to any of the characters, it was the narration that I loved. As I read the story, it felt as if I was reading a fable or a fairy tale.   It was a wonderful storyline with a great cast of characters but I wasn’t’ attached to any one specific thing throughout the whole story.   Each chapter was short and I finished the whole novel in one afternoon. The storyline was creative and unique and one that will stay with me for a long time, like The Wage another novel, I picked up on a whim.   Inside The Head of the Saint there was love, there was confrontation and confusion, a story that gets more intriguing as more characters are introduced. The main character must make some decisions that will affect his life and the lives of the people around him.   It was great read and one that others should read.

To honor his mother, Samuel is fulfilling her requests. She wanted him to light three candles at three specific places and to find his grandmother and father in Candeia. It’s a long journey on foot to Candeia which leaves Samuel withered and reduced. His grandmother greeting is harsh and she sends him to seek shelter down the road. He reaches the cave just before grandmother lets loose the clouds loaded with rain. In the morning, Samuel discovers this cave where he sought shelter is actually the concrete head of a saint whose head has fallen off and is now lying sideways. Looking up to the sky, Samuel discovers the rest of the body of the saint standing tall on the hill, headless. It is this cursed saint that is the center of this story, the town has been condemned a slow death because of the state this saint sits in. Samuel hears women’s prayers twice a day while inside this head as he begins to make this concrete structure his home while in Candeia. Samuel basic needs of food, water and an infected wound are not being meant, causing Samuel to grow weaker.   Francisco unexpectedly drops in, for this was his hideout and the boys start to become friends. There is something about these voices that Samuel hears and Francisco is able to help Samuel understand what they mean. Francisco wants to take advantage of this situation. Samuel is also hearing singing; beautiful singing but the voices are interrupting what he is able to comprehend. Samuel and Francisco start to provide hope for the people who were once fearful of the saint but all of this comes at a price. The story builds and individuals true colors come out. Once fearful, they now have hope and they all want it and search for it. It’s a wonderful story, one I really enjoyed.