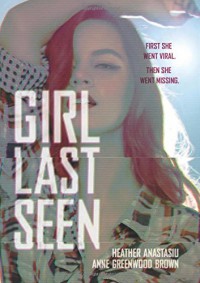 I thought this was an excellent whodunit novel. The cover of the novel did nothing for me but the synopsis pulled me in and I enjoyed that there wasn’t a parade of characters but just a few who lined the pages. The history of two of the main characters played an important role as Kady and Lauren were bullies who preyed on the weak as teens and now in high school. It is these weak individuals who just might be the suspects who targeted Kady. Hearing Lauren’s side of the story, Kady was the initiator and Lauren, followed in her footsteps. The girls began their own musical duo years ago which is now a musical sensation. Kady loved to be out in the public’s eye doing all the public speaking whereas Lauren was the quiet one, working on their song lyrics. They were on top of the world until Lauren got sick and now she can no longer sing.

As if this is not enough tension and misfortune for these two girls, there is also an incident with Mason, Kady’s boyfriend that has put a strain on the girl’s relationship. Kady has continued singing without Lauren, the two have exchanged words about this situation and Lauren’s still has deep feeling about this issue.   Jude, a previous friend of Lauren’s has now moved back into town and his presence has me questioning his intentions.   The book takes a drastic turn when one of the girl’s turns up missing.   Kady’s sudden disappearance has everyone pointing their fingers at the individuals who are closest to her, while I tried to keep myself a neutral party. Kady’s loud and flamboyant personality had me wondering if perhaps a fan wanted something more from Kady than she was willing to give. Everyone claims that they were innocent, for of course they are, but I figured it out before the author reveals the guilty party. I liked how the author led you down a path and the path veered, making your wonder if you chose the right direction.   The ending was terrific, it was impressive.   Everything lined up perfectly, almost too perfectly, that I actually cheered at the end for it was a perfect performance for someone who walked in those shoes.

Thank you NetGalley and Albert Whitman & Company for sending me a copy of this novel in exchange for my honest opinion.